Jimi, my brother and our founder, developed his passion for making wine in the Beaujolais region of France from 1990-1995. I always knew that his time there was extremely important to him, but had no context, local color, or stories to share. After his passing, for whatever reason, I was unable to reach out to the family for which he worked. So, I put it on the back burner, thinking of it often, but never actually acting on it. Sometimes procrastination is a blessing in disguise, and so it was this past March with Pascal, Jimi’s son and my nephew. 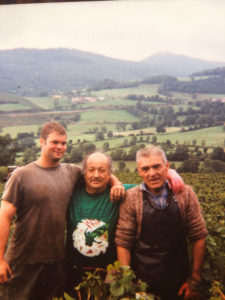 To give a bit more background, after graduating from Linfield College with a communications degree in 1989, Jimi had no plan.  He bought a one way ticket to Europe.  He traveled and would take whatever job he could get to fund his next travel experience. He was connected with one such job, working for Domaine Dechamps in Beaujolais by my cousin, Linda, who lives in Lyon.  A mutual friend of Linda’s at the winery knew they were looking for harvest interns and Jimi applied.  He was accepted and returned there for 4 additional harvests.

The Dechamps family was important to him.  I knew our corporate name, The Morne Wine Company, had a connection to his time in France.  I knew that Pascal was named after a friend he met while working harvest.  I knew his experience was meaningful enough for him to return for so many vintages and to pursue winemaking when he returned to Oregon in 1996. 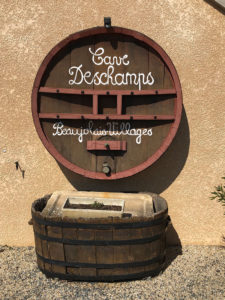 In early 2018, a friend of mine found out that the winery and family were still there in Beaujolais. The pot that was on the back burner suddenly moved to the front. Add in that Pascal had recently moved to France and there was no longer any excuse to continue to procrastinate. In fact, it seemed like yet another lesson from Jimi to grab life by the horns and make some memories while you’re still alive and kicking.

Before Pascal left for France, he asked if he could take a bottle of the 2003 vintage (Brooks) that Jimi made because he planned to go visit the Dechamps family at some point. Coincidentally, I had a European business trip planned for March. A phone call and a few text messages later, Pascal and I made a “plan” to go visit the Dechamps family together.

The plan was to make a reservation at the winery, show up, and see if anybody there remembered Jimi. I picked up the phone and called. This is where I quickly realized that my inability to speak French might be an issue as the person who answered the phone asked if I spoke French, and upon saying “no,” quickly hung up on me.  Pascal and I had a friend of his call them back.  She was able to make an appointment for 10am, Thursday, March 21st.

After meeting up with Pascal in Paris, we headed out with no expectations for our visit.  After all, they hadn’t heard from Jimi for 20 years. Maybe they wouldn’t remember him well? And maybe not at all?  They had many interns over the year.  A lot had changed since 1995. 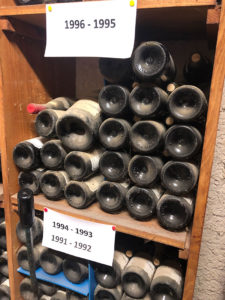 The vintages Jimi worked on.

The son, Phillipe, (close to Jimi’s age) had taken the role of winemaker from the father.  Maria, who also worked harvest with Jimi, was Phillipe’s wife.  They ran the winery and tasting room after building a house on the father’s property.  We arrived and met the wife, who only spoke French.  Luckily Pascal knew enough French to have a conversation.  It was very hard to gauge her connection to Jimi as she was fairly stoic. Plus, as you may recall, I don’t speak French, so I couldn’t understand one word of the conversation.

Phillipe arrived and things quickly warmed up.  We tasted a few wines while Pascal shared that Jimi had passed away, the story of his winery and where Brooks Winery is today.  Pascal took out his phone and shared photos from Jimi working harvest with him.  Philipe went and grabbed an envelope full of harvest photos, many of which included Jimi.  Mind you it has been 20 years and the photos were that accessible!  They began to share stories as they thumbed through the photos. 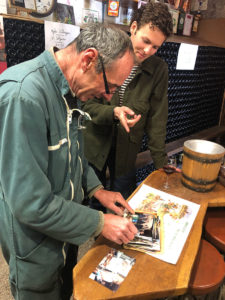 Phillipe and Pascal looking through photos.

Pascal soon mentioned that he was named after someone Jimi worked harvest with and inquired if Philipe knew how to reach him.  Turns out, “French Pascal” is the brother of Philipe’s wife, Maria! Philipe got on the phone to “French Pascal” and invited him over.

While we waited for him to arrive, we walked up to the parents house, which is also where the winery is and where Jimi worked.  We got a tour of where Jimi slept, ate and worked.  We got to meet the father who sat with us on our deck for a glass of rosé.  Pascal pulled a letter out of his pocket that was written by the father and mailed to Pascal’s mom, Bozena, who worked harvest with Jimi in 1994.  The look on the father’s face to see his handwriting and the words he wrote to Bozena was priceless. (Remember, I could not understand any of the conversation,  but I could read the emotions on the faces!)

Shortly, “French Pascal” arrived.  He was told of the tragedy of Jimi’s passing.  You could sense the sadness across all of them.  Philipe then went on to tell him that Jimi’s son was named after him.  The joy on his face was priceless.  He had no idea that Jimi had named his son after him and couldn’t believe he was meeting him.  Pascal got to meet his namesake!  It was a happy moment for all. 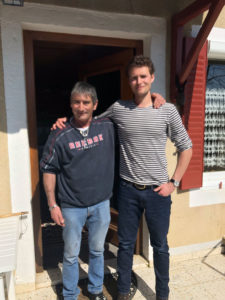 Remember that earlier mention of our corporate name, “The Morne Wine Company,” having something to do with Jimi’s time there? Mystery solved.  Turns out that is their street—Jimi named his company after their street!

By the end of the 3 hour visit, we had developed a unique bond and created a lifelong memory.  We gave them the bottle of wine from 2003 that Pascal had brought to France, Jimi’s last vintage.  They gave us a bottle of 1995, Jimi’s last vintage working in Beaujolais with them.  They extended an invitation for Pascal to work harvest.  I am considering bringing their wine to sell in our tasting room.

Sometimes I wonder if  Jimi orchestrated this visit, yet knew to wait long enough until Pascal was on his own, forging his own path. It answered a lot of questions for all of us and provided that context and imagery that we had been lacking.  It was a beautiful moment in our lives and one we will treasure for ever.